Why Should I Care About Fake News?

Fake news has been a serious issue in American and international society lately. It’s a major problem in politics, media (both digital and traditional), national security, and it affects our view of the world and our discussions with other people. As we prepare for new elections, assess our reliance on social media, or have daily conversations with friends and colleagues, concerns that fake news affects society are important.

Facebook says it has uncovered a coordinated disinformation operation ahead of the 2018 midterm elections.

The Washington Post and several other news organizations reported on July 31, 2018, that

“Facebook has shut down a sophisticated disinformation operation on its platform that engaged in divisive messaging…that could affect the November election. It also...questions whether other technology companies are still being used as conduits for disinformation, as Google, Twitter and others were around the last election.”

“We’re concerned that these and other attempts pose security threats to a broadening array of groups connected with both American political parties in the run-up to the 2018 elections,” he said in his blog.

Social media companies and Congress have already done a lot to expose the problem and remove foreign fake news accounts from certain platforms. But the problems persist. Foreign agents are still active.

But fake news isn’t all foreign, and it isn't all political. It didn’t start out that way, and it’s not gone yet. 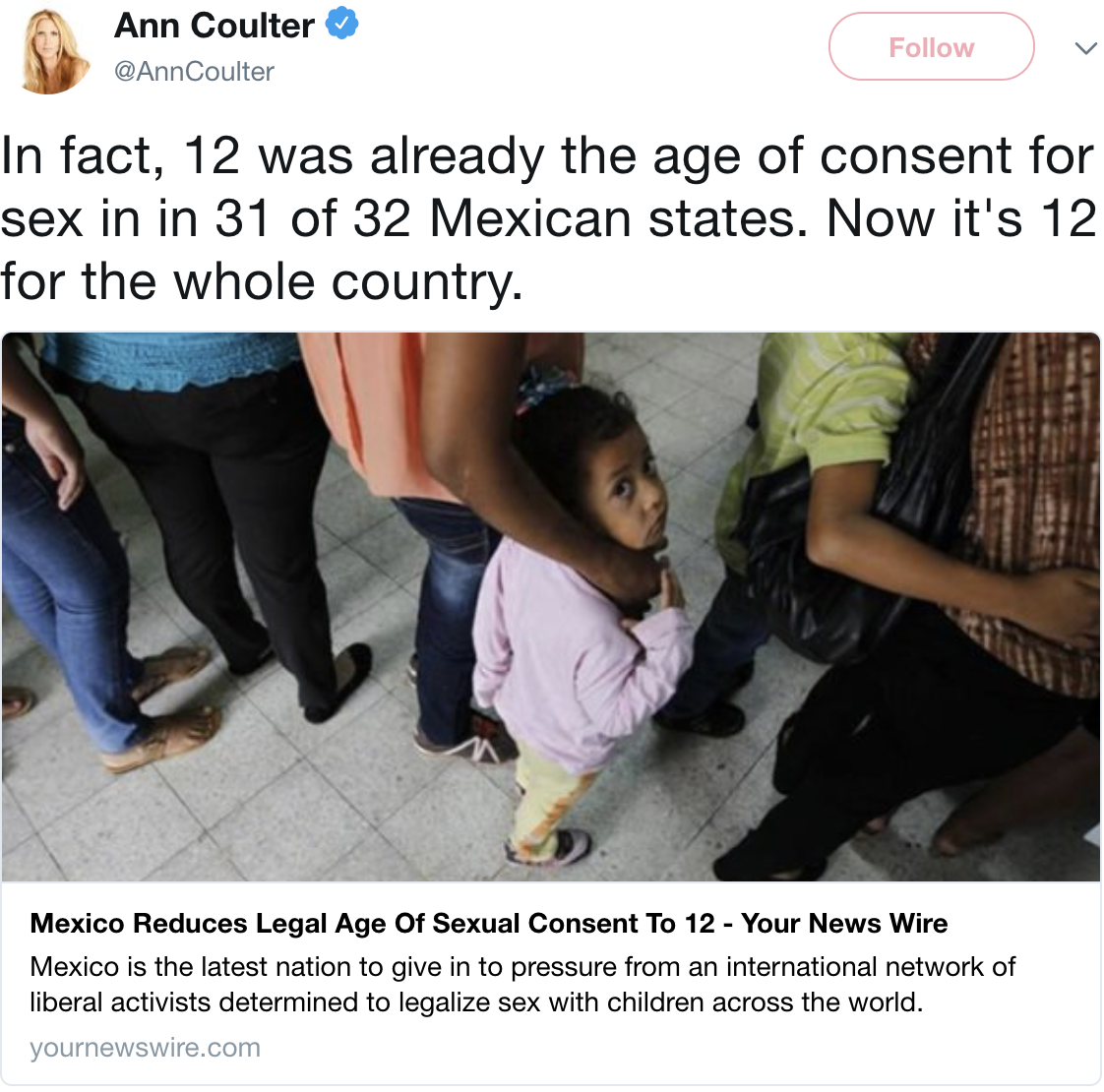 Ann Coulter tweeted a fake news story from YourNewsWire.com which falsely claimed that all of Mexico lowered the age of consent. 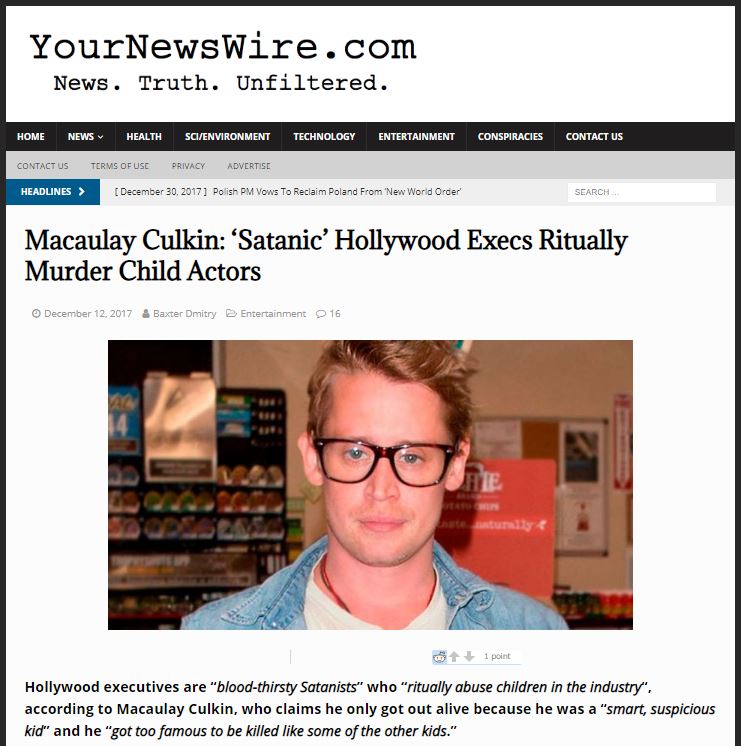 Fake news comes through a complex of commercial, political, psychological, social, and computer-scientific factors that make it hard to grasp in its totality. And the topic has been politicized—individuals use the term, “fake news,” to undermine reporting that’s damaging to their own version of events.

It’s also hard to talk about because people think it doesn’t affect themselves, that it only affects other people. And, like the perception of media bias that occurs everywhere [1], individuals think that people on the “other” side of the political spectrum make fake news, believe fake news, and pass along fake news, and that their side doesn’t. (Rigorous research has shown that political fake news in the 2016 Presidential campaign was largely pro-Trump. But many of the most recent Russian fake news efforts are portraying anti-Trump events, and continuing to fan the flames about ongoing “hot-button issues” in American society and culture.) But it’s not the Russians’ doing alone—American social media users click on it, consume it, like it, and share it. No one side is innocent in this mess, no matter what political side you’re on, and it’s important to try to be objective about it.

It’s not just an American problem. Fake news has led to violence in India and Myanmar. It played a part in the UK’s Brexit vote, and is expected to interfere in upcoming elections in many countries. Indeed, on August 21, 2018,

"Facebook said that it had identified multiple new influence campaigns that were aimed at misleading people around the world…trying to sow misinformation. The activity originated in Iran and Russia, Facebook said. The latest campaigns appeared to be similar to those of past operations on the social network: to distribute false news that might cause confusion among people, and to alter people’s thinking," according to the New York Times.

That’s why it’s time for a clear and balanced presentation, based on the best academic research and most reliable reporting. What exactly is fake news? How did it develop? How does it operate? Can it really affect elections, and inflame (or suppress) social conflicts and violence? What’s been done to curb its influence, and do these measures work? What can each of us do right now to reduce the problem? Because fake news so often spreads through social media, it relies on friends posting, sharing, retweeting and otherwise passing it on to other friends and followers, everyone has a role to play in spreading or halting fake news, and we have some realistic suggestions for you that can help you to prevent its spread throughout your own digital networks and reduce its effects on people's thinking.

Our website has the following sections that you can read independently or in any order.

This site was developed in the Spring and Summer of 2018 by graduate students at the University of California Santa Barbara, through a seminar in the Information, Technology, & Society PhD emphasis program associated with the UCSB Center for Information Technology and Society, a research, education, and outreach center dedicated to understanding technology in our lives.  The authors represent an interdisciplinary group, including

Prof. Joseph B. Walther (Director of the Center for Information Technology and Society)

Technical support was provided by Eric Copsey, Letters & Science IT