Another way you can help stop the spread of fake news is to learn more about the way it works. While we hope our website’s given you some good information about how fake news is created, spread, and why people fall for it, reading about fake news can only do so much. Some online resources exist that can help you train yourself to investigate suspicious news, and get first-hand experience with how the fake news process works. A number of games exist to train and sensitize readers to detect and stay immune to fake news.

Factitious is a game intended to help players learn how to identify fake news stories. The game shows actual news articles, without revealing their publication source until the player clicks to see it. It asks players to identify if the article is real or fake. After it tells you whether you were right or wrong, the game highlights elements of the news article that can be used to help identify if the article is real or fake. (Spoiler alert: The most common decision rule has to do with the reputation and purpose of the original publication source of the stories.) The intention is that after a few rounds of the game, players can learn to recognize fake news based on common patterns. By learning these patterns in the game, the hope is that players will take these skills with them and to recognize fake news when they see it elsewhere. 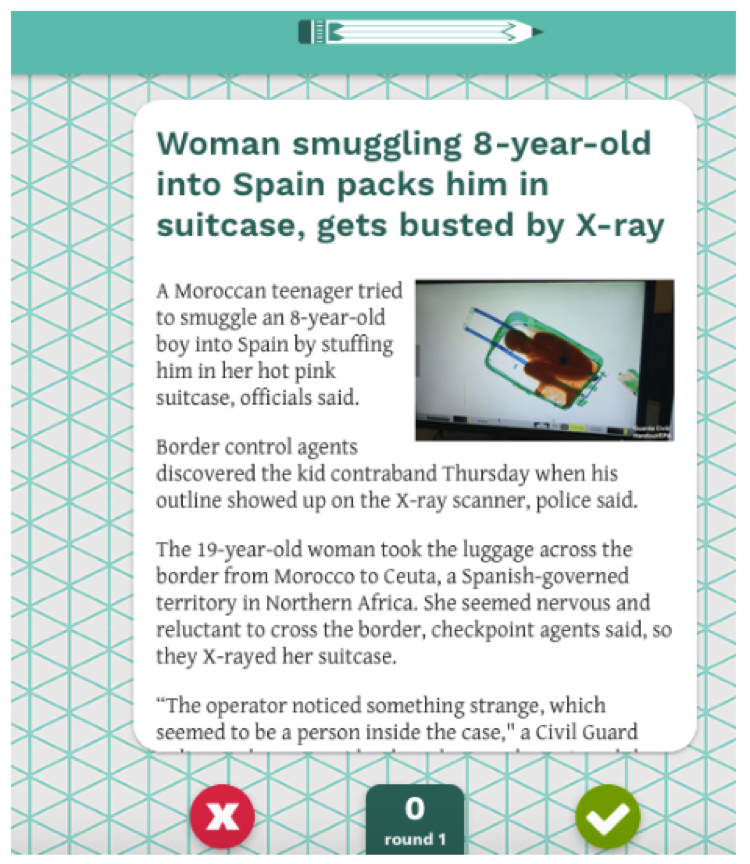 Round 1 of Factitious, a fake news training game

Two other games, Bad News and Fake It to Make It, let players learn more about what goes into creating fake news sites, and how it is spread. Like us, the creators of these games believe that the best way to stop the spread of fake news is to understand where it comes from and how it is spread, so you can keep yourself from being duped.

A group of European researchers and journalists developed a game designed to help people (optimally between 15-35 years old, they say) become more conscious of fake news distribution practices and to resist deception and misinformation in the long run. Bad News puts players in the role of producers of misinformation and fake news in return for badges rewarded to the “masters of disinformation.” Players learn to distort the truth, plant falsehoods, and deflect attention among their virtual Twitter followers. By exposing people to fake news production processes and helping them gain hands-on experience, Bad News is able to help people develop increased familiarity to fake news distribution practices and immunity towards manipulation. 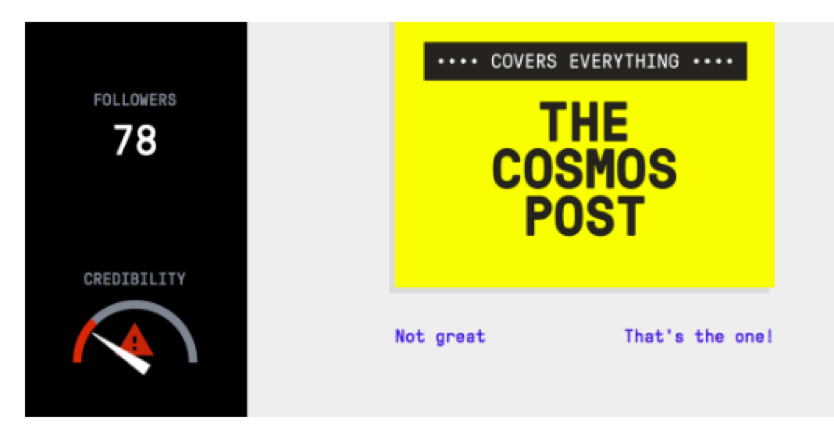 Fake It to Make It

Fake It to Make It also puts the player in the role of the creator of fake news, trying to make money from advertisers by setting up a site, copying news stories and re-posting them, creating fake social media accounts and generating interest by choosing users and groups to target with social media messages. It provides a running tally of how much attention your website has gotten and how much money you’ve made. You quickly get a sense of what questionably-ethical strategies work best – it’s amazing how low you can sink, how quickly, to start winning!

Fake It to Make It teaches players how fake news peddlers monetize their sites.